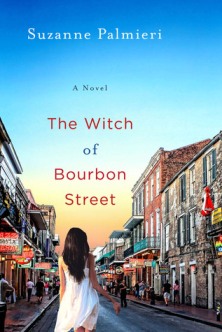 I really need to get to the library.  I keep running into Barnes & Noble for gifts or cookbooks, then walk out with a stack from the bargain bin.  I’m spending far too much money on books, especially when I have access to an excellent resource in my local library.  I’m also beginning to realize why most of these books are sold at a discount.

The Witch of Bourbon Street had a pretty convoluted plotline, but I’ll give it a go.  Frankie is a witch from an old family who has long denied her powers.  She moves back to the family home that witnessed several mysterious deaths several generations back.  The disappearance of Frankie’s son and appearance of her long-lost daughter force Frankie to confront her past.

It’s almost Halloween, so what better time is there to read a book about witches and voodoo?

Let’s start with the characters.  First of all, there’s about a bazillion of them, and none of them are complex or complete.  Frankie and Dan are soulmates (Palmieri tells you that every time they speak or think about one another), but fight constantly.  Their conversations are stilted and lack any sort of chemistry.  Millie could be one of the more interesting characters, but she comes off as the stereotype of a psychopath.  There’s a mom, a grandma, a grandfather, a son, a daughter, the guy who raised the daughter (still not sure why he was picked), an ex-brother-in-law who owns a convenience store, some random dude who runs the family bar in NOLA, and a local historian.  Then add in all the ghosts.

The story jumps around from character to character and from present day to the past to some sort of ghost dimension.  Just try to keep up.  The pacing at the beginning drags, only to have all the plotlines wrap up quickly and neatly at the very end.  Look up “anticlimactic” in the dictionary and you’ll see a picture of this book.

I wanted to like this.  I love New Orleans, and the thought of reading a book like this in October was also appealing.  Then I started reading.  The Witch of Bourbon Street is a convoluted mess with underdeveloped characters, a meandering storyline, and stilted dialogue.

This is one of those books that makes me wonder, “How on earth did this get published?”  Then I saw that Palmieri has published five books.  And people on Goodreads love her.  Perhaps I’m being too picky these days, but I really hated this.