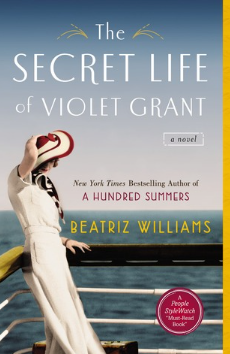 The Secret Life of Violet Grant is two stories in one.  Story number one follows Vivian Schuyler, a 1960’s socialite who bucks the system in pursuit of journalism career. Early on in her story, she mistakenly receives the suitcase of Violet Grant, her long-lost aunt.  Thus begins the second story the parallel second story.  Violet Grant was a woman not unlike her niece.  Violet became a scientist in the early 1900’s, moving to England and then Germany, where she mysteriously disappeared during World War I.

I have read a number of books lately where two (or more) stories run concurrently, and it is hard to do well.  In this book, Vivian and Violet’s stories could stand alone.  Williams uses a deft hand to weave the two together and link them in ways that do not seem contrived.

Violet is a wonderful character.  She is complex and complicated.  I enjoyed watching her grow as she matured throughout her story.  She was not always likeable, and she was not always logical.  She seemed to step off the page at many points in the story.

The mystery of Violet’s story kept me interested.  Early on, it made me uncomfortable, and seemed to drag at times.  I cannot put my finger on the moment it sped up, but once it did, it became a unstoppable force.  I wanted to figure it out.  I wanted to solve the mystery.  Most of all, I wanted Vivian to be okay.

Vivian’s story was decent, but it did not hold a candle to that of Violet.  It really is a shame, because New York City in the 1960’s should have been an interesting setting.  And a woman trying to make it on her own in those days should have leapt off the page.  It is almost like Williams decided we could imagine the setting and the clothes and the society for ourselves.  It paled in comparison to the music nights with Einstein in Berlin.  She actually made the 1960’s seem grim and depressing compared to 1912 Berlin.

I think the idea was that Vivian was a modern version of her aunt.  Unfortunately, she could not hold a candle to Violet.  She swaggered around the story and talked a good game, but it felt hollow.  Violet I would like to meet, Vivian not so much.

This was an enjoyable read.  It’s not quite a beach read or something light for a girl’s trip.  It is darker than that, but richer and deeper for it.  The story held my attention and fired my imagination.  Williams can write, that is for sure.  This book was strong and weak all at the same time.  But I enjoyed it and would read anything else that Williams wrote.

If you are looking for something to read that will take you to another world without making you work for it, this is a good choice.