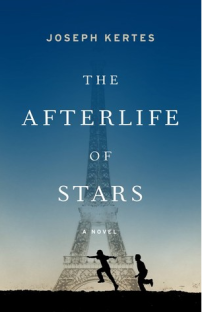 I was intrigued by this book at the very beginning.  It was an intriguing time and setting, and I thought the narrator and his story had potential.  But every page was harder to read than the previous page.  I had to force myself to finish it.  I only did so because I’m hoping to read 90 books this year and did not want to waste the days I spent on it.

9.8-year-old Robert Beck tells the story of his family’s flight from Budapest to Paris.  His family is fleeing ahead of the Russian Army invasion after World War II.  Together with his brother, grandmother, father, mother, uncle, and pregnant aunt, they attempt to reach the safe haven of his great-aunt’s home in Paris.

Kertes’ descriptions of the places and characters involved could at times be vivid and evocative.  There was something about the unreliable narrator and his descriptions that held such potential.  There were times when it was so very interesting to try to figure out what was real and what was imagined and interpreted.

Kertes is from Hungary and his family escaped around the same time period as this novel.  So there is a feel to this novel that was immediate and believable.  I was also fascinated by the word choices and cadence.  It felt deliciously foreign.

While the unreliable narrator lends something to the novel, I think it took more away from it.  It was often hard to understand what on earth was going on.  Perhaps some of these cases would have made sense to a Hungarian or someone Jewish, but not to me.  And I just didn’t want to work that hard to follow the story.

The other problem with Robert as the narrator was that he seemed to alternate between being far too cognizant and wise for a 9-year-old, and way too young.  Sometimes he was far too mature and aware for his age, and sometimes he was far too immature.  I am sure you could explain it away as a product of the times, but I just could not get there.

Another problem was the brother, Attila.  There were very few redeeming qualities to that little sociopath.  Again, maybe it was a different time or culture, but every time he came into the story, I thought, “Jesus, what now?”

I could nitpick this book to death, but overall, it just did not flow.  I never really understood the point of the story.  There was nothing particularly interesting about the people, and even the climax of the story felt like just another weird thing that happened.

This was the sort of book that pretentious Honors English college students gush over as “important” and “meaningful”.  Which, to me, usually meant it was weird, full of “lyricism”, and contained sentences that never seemed to end.  I wanted to like it.  I wanted it to be something special.  But I really, really hated it.