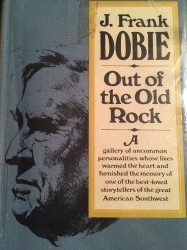 J. Frank Dobie has been called “The Storyteller of the Southwest”.  He was born late in the 1800’s and lived into the second half the 20th century.  I had not read any of his books until this, but I new his reputation as a chronicler of western tales and lore.

Out of the Old Rock is a collection of character studies made by J. Frank Dobie over the course of his writing career.  After his death, his widow fulfilled his request that the best be turned into a book.

After reading this book, I can attest that Dobie’s reputation as a teller of tales is well deserved. As I read this book, I was transported to a different time and place.  I could visualize the people and places Dobie described.  I understood how these people inspired and influenced his work.

The people featured in this book were interesting and quirky people.  They belong to a different time, and a time that is not that long ago.  It painted a picture of the West at the turn of the century that was alternately romantic and gritty.  And it was quite clear that the people who inhabited this time and place made it what it was.

This book is a collection of character studies, not essays or short stories.  I could imagine the people who Dobie featured in each study, and I was impressed by how completely he drew out the essence of each person.  But these were not complete stories on their own.  They often jumped around or seem to drag on beyond what I found interesting.  The level of detail would be great as a foundation for a story, but I got really tired of it really quickly.

The better Dobie seemed to know a person, the longer and more pointless the study seemed to become.  The earlier studies interested me more than the ones towards the end.  It is hard to decide if that is because the format got old or if the people got less interesting to me.  It could also be the way the chapters were arranged.  But I could have read two or three of these and been done with the book.

Out of the Old Rock was an interesting book to read.  It was filled with the sorts of characters that occupied a particular space in history.  I enjoyed  the glimpses of their world.  But these were not stories, merely and exploration of those people in an effort to build stories around them in the future.  J. Frank Dobie is an incredible storyteller who wrote about some fascinating people.  This is a book unlike any other I have read, and while I cannot say it was the best book I’ve ever read, I am glad that I read it.