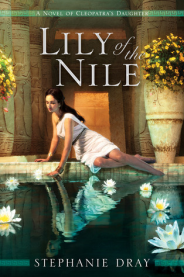 The good and bad of checking books out from the library is that you have to anticipate the type of book you’ll want in a day or a week.  So far this year, I’ve been a bit heavy on “self-help”, adventure, and non-fiction American History, so I looked for American Daughter by Stephanie Dray at the closest branch of my library, but it wasn’t there.  I actually kind of love the combination scavenger hunt of Goodreads and my small library branch because with 300 book on my to-read list, something has to narrow it down.

I picked this book up, and put it down.  I went to another stack, then wandered back.  Nothing was really striking me, and I thought perhaps a Historical Romance was exactly what I needed to break my malaise.

Most of us know the story of Cleopatra and Julius Caesar and Mark Antony.  I always thought of it as this golden moment in time, never really thinking too closely on the tragedy and historical resonance of the whole situation.  This book took me beyond that snapshot.  I truly never thought about what happened after Cleopatra took her life.  I mean, I’ve studied enough to know that the age of Augustus Caesar continued after, but frankly, it wasn’t that exciting to me and I stopped there.

Lily of the Nile picks up where Shakespeare and myth leave off.  This story deals with the fate of the children of Cleopatra and Mark Antony.  Octavian (Augustus Caesar), brings those children to Rome, and adopts them into his household.  At best, they are orphans dependent upon his generosity for their futures.  At worst, they are political prisoners in golden shackles.

Dray does a good job of weaving history with fiction.  She changes timelines to better suit her story, but does a rather good job of relating the overall tenor of the time.  I also enjoyed watching Selene grow from a coddled princess to a force to be reckoned with.  I appreciated that, in this book, there were few of those moments where you think, “You’ve got to be kidding me…get it together!”  Sure, Selene doesn’t always make the best decisions, but overall, she’s growing into her mother’s shoes.

This was an enjoyable book, but I found that it often dragged.  I’ve since learned that this is the first in a trilogy, and it does nothing to dispel my distaste for trilogies.  I’ve rarely read a trilogy where at least one of the books seemed to be filler.  I feel like Dray knew she had too much for one book and decided to stretch it with filler.  It definitely ended like a “To be continued…” television show.  While I enjoyed it, I don’t know that I actually feel the need to read the next in the series.  Perhaps that will change as time goes by.