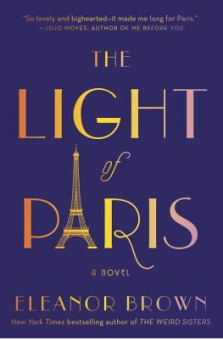 I have a good family.  I have close meaningful friendships.  I have felt both great love and great sorrow.  In fact, I’ve felt both deeply enough that I thought I would drown in them.  On a more practical level, I live a good life in which I am sometimes happy and often content.

This book made me long.  For what, I do not know.  But I longed as I read this.

The heroines of this book were such complete, whole people.  I ched for them.  I was embarrassed for them.  I wanted to shout at them to DO SOMETHING!  They could be so earnest and dreamy and philosophical and blind to their own needs.  But instead of being off-putting or annoying, the were entirely sympathetic.  You understand what they did not.  You knew not where their journey ended, but that it was the journey itself that mattered.

Earlier, I reviewed a book called The Little Paris Bookshop.  The Light in Paris is the quest story I wanted when I read that book.  I might even go so far as to classify this book as an anthem for the way I want my life to grow.

This book should be a fluffy, Red Dress Inc, chick lit story.  But there is something so honest and true about this story.  Brown tells the story of Madeline and her grandmother Margaret in alternating chapters.  The intellectual part of my brain marveled at how complete the two stories could be, while absolutely meshing at the same time. Each story could stand alone.  Yet, they each provide depth to the other as they build.

Madeline is an unhappy wife, constrained by expectations, who pays a fateful visit home to her mother in 1999.  While there, she finds her grandmother’s diaries, providing her with context and insight into her own life.  Her chapters alternate with those of her grandmother, who is a young society woman in the 1920’s.  Margaret also takes a fateful trip that changes her life, though hers is to the titular Paris.

The writing is lyrical, beautiful, and well paced.  Brown describes places and events with a deft hand that puts you in the moment.  The pages swell with sights and sounds, wishes and hopes, darkness and light.  Brown transports you to the Paris of Hemingway and the magnolia scented walkways of the South in Spring.

I could continue my love letter to this book, but I will spare you.

Simply put, The Light of Paris does what all great (yes, I said “great”)  books do.  It puts you in the shoes of the protagonists, so that you occasionally blink and realize that you aren’t in the story.  It makes you remember your first trip abroad.  The first time you flirted with a stranger.  The time you got caught outside, bra-less, in your pjs.  The sticky, buzzing heat of a Southern Spring.  When you finally close its covers, you travel through several days wishing you were in Paris or Magnolia or any of the magical places it conjured in your brain during your journey through its pages.